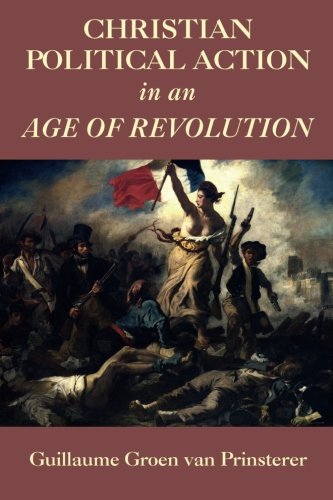 A companion volume to Rougemont’s The Individualists in Church and State, this outline of Christian political action was written by the nineteenth century pioneer of the genre, the Dutchman Guillaume Groen van Prinsterer. Groen not only developed a political philosophy based solidly in Reformation truths but he also formed a political party to bring those truths to bear in the political forum of his day.

Then, as now, the battle was against the Revolution: “the invasion of the human mind by the doctrine of the absolute sovereignty of man, thus making him the source and centre of all truth, by substituting human reason and human will for divine revelation and divine law.” It is “the history of the irreligious philosophy of the past century; it is, in its origin and outworking, the doctrine that-given free rein-destroys church and state, society and family, produces disorder without ever establishing liberty or restoring moral order, and, in religion, inevitably leads its conscientious followers into atheism and despair.”

Against the Revolution there is only one antidote: the Gospel. To proclaim and elaborate this truth was Groen van Prinsterer’s life work. This volume-never before published in English-is an adept summary of it.

Review copies will be made available upon contacting .